When it comes to automating heavy loads, there aren't many options for large capacity bearings. Slewing ring bearings are often the go-to because they come in large diameters and can withstand enormous payloads. But they're extremely expensive. They have long lead times, ranging from four to six months on average. They're also tricky to assemble and require an inordinate level of maintenance.

There's got to be a better way.

Earlier this month, Burke laid out the differences between the former and the latter.

Slewing rings, while not the fastest moving components, can carry insane amounts of weight and come in very large diameters. But they're cumbersome to build and maintain.

Vee bearings function in a vastly different way than slewing ring bearings. For one thing, vee bearings are internally lubricated—for life. Rubber shields and seals protect the bearings from contamination, making it a long-term investment and dramatically reducing the need for maintenance.

Twin bearings, essentially two single-row bearings, work for lighter loads. For heaving loads, you'll need the double row bearings, which are found in our HDRT—that stands for heavy duty ring and track—product line. Our largest bearings have an outside diameter of 150ml, use rollers instead of balls and can each support a radial load capacity of 33,000 pounds.

All that while providing smooth, low-friction motion.

One of the key features of these vee bearings is that they're self-cleaning. To quote Burke:

"The vee guide wheel provides a wiping action for harsh environments where the debris is ejected," he explained during a July 7 Design World webinar he hosted on the topic. "It's not like a skateboard wheel hitting a rock where it's going to stop, and it's not like a steamroller where it's going to crush everything down. It actually acts so that it ejects any debris on that running surface."

There's so much more to say about the subject. Thankfully, Burke's webinar was memorialized in a YouTube clip. Click here to watch the presentation all its uninterrupted glory. 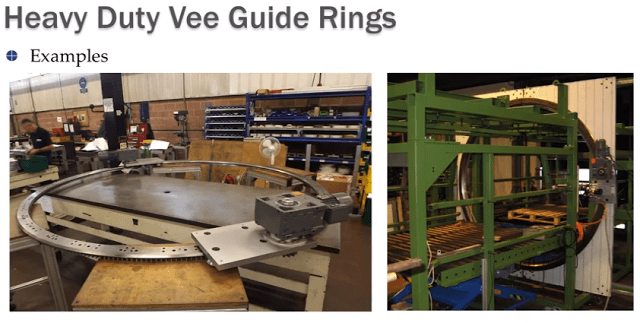