10 Things You Should Know About STEM 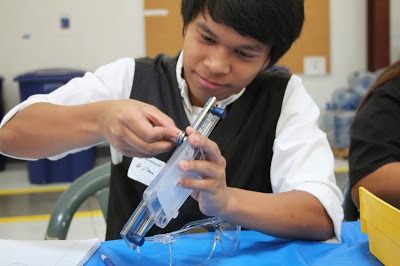 Science, Technology, Engineering and Math—STEM, in colloquial parlance—are the tools we're using to build a better future. We like to think that the rock stars of the future will be robot-building, mechanically and scientifically inclined geeks.

That's why STEM is having something of a cultural moment right now. Everyone from celebrities to academics like Neil deGrasse Tyson, politicos to industry phenoms like Dean Kamen are promoting the sciences, trying to capture the imagination of young people and trying to get them to realize that STEM is becoming a shared language of the modern world. Those proficient in science, tech, engineering and math can be the leaders who shape our future.

In that spirit of possibility, we present to you a list of 10 things you should know about STEM:

1. STEM shapes everything around us. Science is, essentially, our natural world. Technology gives us our phones, computers, telescopes and cars. Engineering begets bridges, appliances skyscrapers and the roads we drive on. Mathematics helps us budget, pay taxes and shed light on some profound truths about the nature of time, space and the universe.

2. We have to get kids interested in STEM early on. STEM jobs are booming at a rate 1.7 times faster than for non-STEM jobs. But American schools aren't producing enough qualified candidates to keep pace. Only 16 percent of high school seniors expressed an interest in STEM careers, according to the U.S. Department of Education. 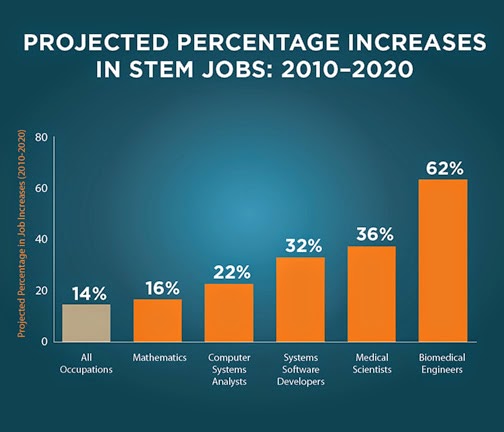 3. Not all STEM careers are created equal in terms of pay. The National Science Foundation tells us that women earn about half of all bachelor's degrees in STEM fields. But they tend to choose different concentrations than their male counterparts. Women generally focus on less-lucrative STEM fields, namely careers in health and life sciences, while men opt for computer science and engineering.

4. STEM skills translate to other fields. Seriously, if you speak "STEM," you're up for pretty much anything. In fact, some 74 percent of college grads with science and technical degrees pursue non-STEM jobs, per the U.S. Census Bureau. While that's kind of a bummer for STEM employers, it makes sense that other industries are recruiting scientifically inclined graduates—they can add value to any field.

5. Early interest in science increases likelihood of a STEM career. The earlier you pique a kid's interest in STEM, the more likely he or she will stick it through to a career in a related field. This underscores the importance of early exposure to the sciences.

7. STEM careers don't all require a four-year degree. There are a host of STEM jobs available for folks who opt for a two-year vocational program over a bachelor's degree. STEM jobs aren't limits to astronomers, physicists and engineers. According to the U.S. Bureau of Labor Statistics, STEM jobs include accountants working on financial modeling, investing, statisticians, machine shop workers and ancillary roles created by the manufacturing industry. Some of those occupations, like aerospace mechanics or construction managers, only require two-year post-secondary education.

8. California is a leader in manufacturing. Maybe the Golden State conjures images of Hollywood and beaches, snowboarding and fine dining. But California is becoming increasingly known for its technology and manufacturing. According to the U.S. Bureau of Labor Statistics, California, Texas, New York and Illinois will lead the nation in STEM careers by 2018.

9. Americans need to brush up on math. Thirty-six percent of Americans admit they aren't fluent in math, according to a survey by STEM advocacy nonprofit Change the Equation. Among Americans aged 18 to 35, that figure ticks up to 53 percent. As a culture, we're much more comfortable with math illiteracy than language illiteracy. How many Americans do you think would admit they can't read, or can't read well? Maybe we should have a higher standard when it comes to numbers.

10. Manufacturing pays well. The average manufacturing worker in the U.S. takes home $77,506 a year, including pay and benefits. Compare that to $62,546 for the average worker in all industries combined.